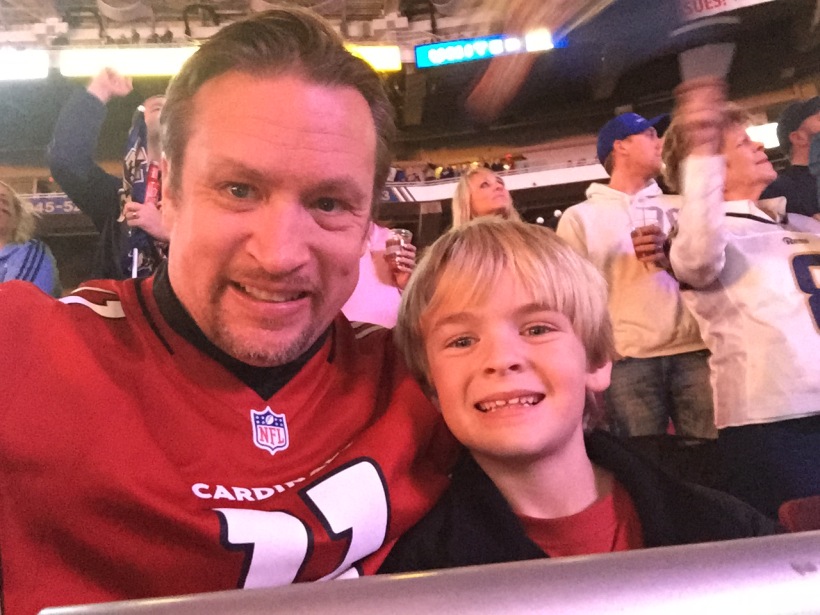 I love football. I love the team component and how teams must work together to succeed. I also like the individual player side of the sport. Football demands that each athlete continue to improve their own individual performance. As far as individual performers there was none better than Super Bowl Champion and Hall of Famer Michael Irvin.

After having much success on the field, Michael Irvin has now gone on to fame as an announcer and football analyst with the NFL network.

I took my son to a Thursday night game in which the NFL network was broadcasting. As the game concluded, Michael Irvin made onto the sideline to prepare for the after game analysis. Then with 1:53 left in the game Michael Irvin did the unexpected and the unanticipated. He noticed a few fathers and sons in the front row of the stands. He wanted to thank us for bringing our sons to the game and encourage us to continue to be great fathers. So he found a box and climb into the stands to take pictures with our sons and us. You can see his tweet here.

This unexpected experience taught me a few great reminders about leadership.

What Super Bowl Champion Michael Irvin Taught Me About Leadership:

1. The Best Leaders Look into the Stands

Michael Irvin was paid to do a job. He was there to announce the game. No one would have thought less of him had he just focused on the job that he to complete. Leaders’ always have tasks to complete. What separates the good leaders from the great leaders is that great leaders’ take to look into the stands to see they can encourage and help. They focus on people while they are completing their tasks and responsibilities.

Coaching Question: When is the last time that you noticed someone in your organization in an unexpected and rememberable way?

2. Great Leaders Encourage what They Want to be Replicated

Michael Irvin was on a mission. He has a passion to encourage fathers’ to be great dads. He understands the value of fathers. If you look through his Twitter page, you can see that he has hundreds of pictures with fathers and their sons. To this is a personal mission. He understands that he must encourage what he values. All leaders’ are on a mission. They have a vision of what they want to see accomplished. Therefore, they need to take time out of their schedule to encourage what they what repeated. The encouragement of leader can make the difference in the life of their followers.

Coaching Question: Would your team say that you are a good encourager?

Michael Irvin made his action unforgettable by pausing to take a picture. He could have just paused to give a word of encouragement. Michael went a step further. He went the second mile. He took pictures and put those pictures on his twitter feed. This behavior is a great lesson for every leader to learn. Great leaders’ go the second mile with their people. They do the unexpected and the unanticipated.

Coaching Question: How could you make your interactions with your people an experience?